We believe that education is another way to contribute to a strong community and hope to create an environment where culturally aware learning and services can be provided to children and youth.

One-on-one and group tutoring are available.
All tutoring sessions will be held online, via ZOOM and Google Meets.

We provide adequate computer and internet access. If students do not have access to the internet or a computer we have computers and laptops available at the INYP Room. (COVID guidelines apply) 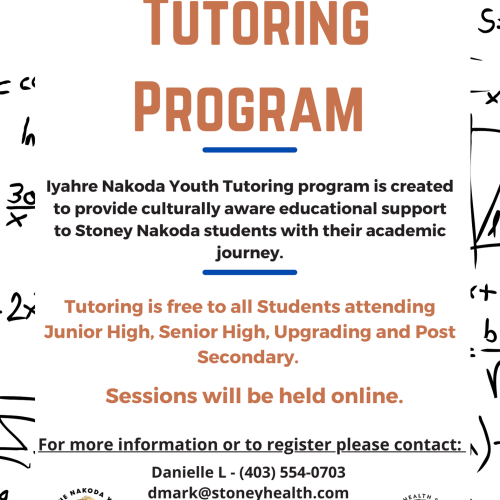 All are welcome. Come out with your families for a great night out. It is a great chance to meet popular Indigenous social media influencers and medical professionals, ask questions and for community members to get vaccinated. There will be prizes, food and loads of fun.

The Power of 100 is an Indigenous-led campaign to increase vaccination rates amongst Indigenous youth, to protect themselves and their communities. Power 100 is a celebration of Indigenous resiliency and action.

The Power of 100 focuses on the importance of keeping Indigenous communities safe while also celebrating community through live music, engagement with social-media influencers, drive-in movies and other activities. This is a chance to have fun while being in safe environment, organized by Indigenous peoples and doctors for the health of the community. Vaccines will be made available at Power of 100 events for those who would like one. There is no requirement or pressure to have a vaccine.

Check out the image or The Power of 100 | Standing Together to Protect our Future for details.

Hunting, harvesting and preparing the hunt were this year’s focus.  Youth, camp coordinators and volunteers set off to locations around the reserve to participate in the day’s featured event. Each day was unique but when possible featured valuable teachings and guidance passed along from Stoney Elders and knowledge keepers, including Chief Clifford Poucette (Wesley First Nation) and Chief Aaron Young (Chiniki First Nation).

The first few week was grounded in foundational teaching. Some youth attained their firearms license and safety training while others fished, learned archery and hand games. Presentations from special guests rounded out the week: Alberta Fish and Wildlife shared info on indigenous hunting rights on and off-reserve, supported by the RCMP, while Stoney Fire Department offered fire safety tips and ways to safely set up a smokehouse.

Once the youth had the basic knowledge, they spent just over a week building smokehouses. This involved cutting trees for poles for the smokehouse. Once they had cut and collected the necessary amount, the group built a smokehouse at several lucky homes around the reserve. One smokehouse took the group about three hours to build including stripping the bark and building the structure. The youth also spent an afternoon at the rifle range and for some this was the first time they had shot a hunting rifle.

The third and final week built on all of the previous weeks’ teachings with hunts and harvests and concluded with the event most looked forward to – the feast! Some youth participated in hunting and one youth harvested their first kill. The remaining group harvested wild mint, picked cranberries and blueberries. The youth were taught to skin and butcher the deer and began preparing the harvest for the week’s big feast at which the community gathered to celebrate and share in the harvest. Check out some highlights from the camp featured in photo galleries below.

Îsniyes – thank you to all who participated – community leaders, Elders, facilitators, the local RCMP detachment, Stoney Fire Department and Alberta Fish and Game staff. Most importantly, a big shout out to the youth and their parents for their commitment and enthusiasm for the program and its teachings. We hope to see you at activities this fall and plan for next year’s camp!

Preparing the feast: all hands on deck

Thank you to Canmore FRN & Community